Highlights of the 2008 International Trauma Conference 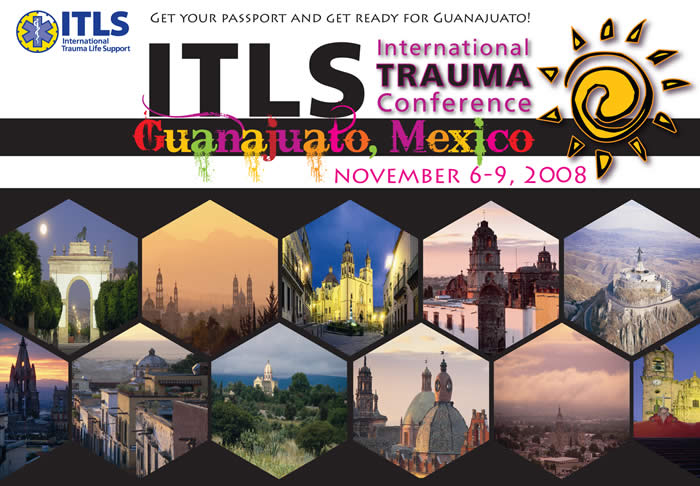 The 2008 International Trauma Conference on November 6-8, 2008, in Guanajuato, Mexico, was a success, attracting more than 175 physicians, nurses, and EMS personnel from 12 countries and territories worldwide.

The City of Guanajuato sponsored the conference’s social event, “Una Noche Mexicana.” The evening was an authentic Mexican fiesta with a mariachi band, dancing, and local specialty cuisine.

The annual ITLS Competition featured 6 teams competing in the Preliminary Round. The 2008 teams included: Florida, Illinois, Japan, Mexico, North Carolina, and Ontario. Florida, Ontario, and North Carolina advanced to the Final Round, and the North Carolina team was awarded first place. Team members were Billy Eldridge, EMT-P; Austin Nabet, EMT-P; and Shane Lisenby, NREMT-P, with Mike Clumpner, NREMT-P as the alternate. The team looks forward to defending their title next year in their home state at the 2009 conference in Charlotte.

ITLS presented its annual awards at the conference on Saturday, November 7. Three members of the ITLS community were presented with awards to recognize them for their ongoing commitment to the ITLS program.

Art Proust, MD, FACEP, of Illinois, was honored for his many contributions to ITLS on the chapter and International level with the John Campbell Medical Director of the Year Award. Dr. Proust has served as the Medical Director for the Illinois chapter of ITLS since 2005. Under his direction, more than 375 instructors have been updated in 2007 and 2008. He has traveled throughout the state of Illinois to personally attend and teach at almost all of the 12 instructor update courses. He also chairs the ITLS Illinois Advisory Committee for the Illinois College of Emergency Physicians. At the international level, Dr. Proust has served the organization as a member of the Editorial Board for the past 4 years.

Eduardo Romero Hicks, MD, Guanajuato Chapter Medical Director, was honored with the ITLS Ambassador Award. His dedication to promoting ITLS programs and for demonstrating a clear understanding of the ITLS mission is evident in the numerous ITLS projects he undertakes, including translation and creation of Spanish-language ITLS manuals and a longtime presence on the Editorial Board. Dr. Romero was also instrumental in organizing the International Trauma Conference in Guanajuato.

The Ambassador Award was established in 2007 by the Board of Directors to recognize an individual who has made a significant and long-term commitment to the organization.

The Ray Fowler Instructor of the Year Award was awarded to Joseph Bielinski, EMT-P, of New York, for his enthusiasm and expertise in teaching ITLS courses.

Mr. Bielinski was not present at the conference to receive his award in person.

The winners of the 2008 Images of Trauma Photo Competition were also selected. Rosemary Provenzano Thami, MD, of Rio de Janeiro, Brazil, was awarded First Place for her photo series, “Extrication in Forest.” Second place went to Dick Pace, of Arkansas for his series, “Early Morning MVC.”

As another well-received conference concludes, ITLS is already looking forward to next year’s event. The 2009 International Trauma Conference will be held in Charlotte, North Carolina, at the Hilton Charlotte University Place on November 5-7. We hope to see representatives from all of our chapters in 2009! 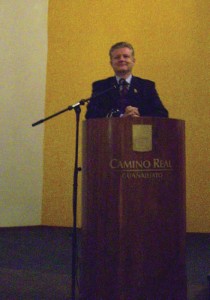 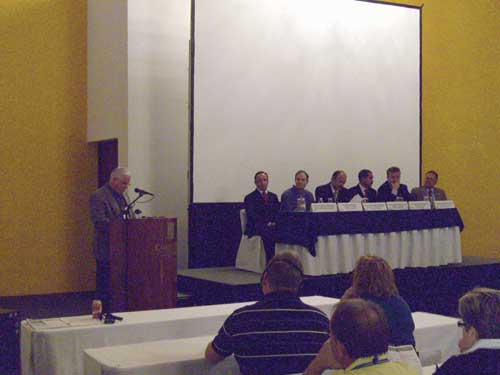 Mexico state and local officials also attended the Opening Session to welcome ITLS, the first medical conference to be held in Guanajuato. 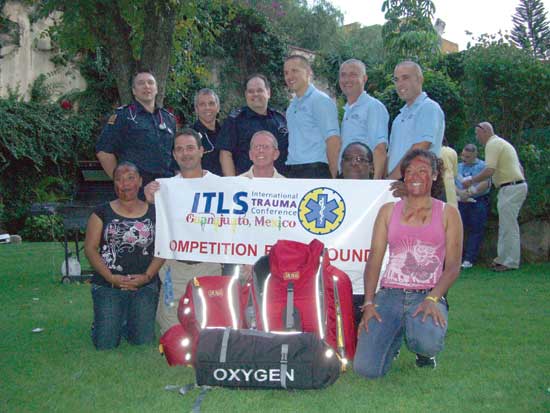 Members of the teams competing in the Finals Round of the ITLS Competition pose with the victims. The teams who advanced to the Finals were Ontario (back row, navy), North Carolina (back row, light blue), and Florida (front row, behind banner). 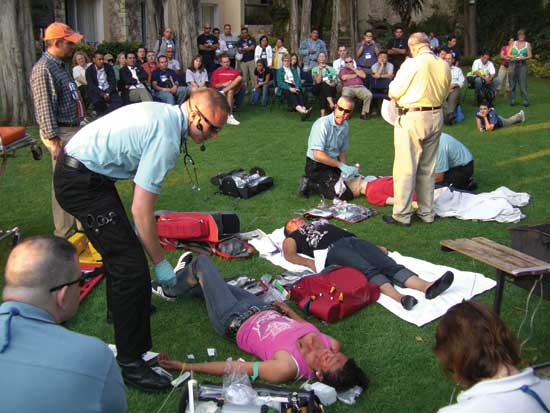 North Carolina, the winning team, treats their victims during the Final Round as spectators watch. The team was composed of Billy Eldridge, EMT-P, Austin Nabet, EMT-P, and Shane Lisenby, NREMT-P. 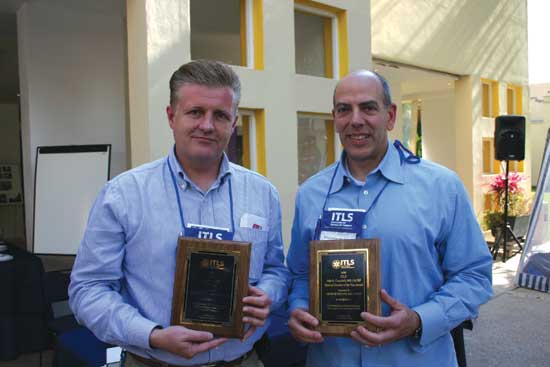 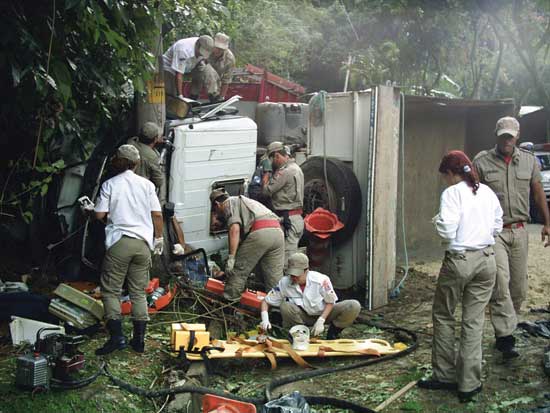 First Place in the 2008 Images of Trauma Photo Competition was awarded to Rosemany Provenzano Thami, MD, of the Rio de Janeiro, Brazil, chapter. Dr. Provenzano’s photo series depicted an extrication in the forest. The fire department of Rio de Janeiro uses scenarios taken from real-life photographs such as these in their training courses, and students act as if they were on scene to provide card. Second Place was awarded to Dick Pace, coroner, of the Arkansas chapter, for his photo series, “Early Morning MVC.” 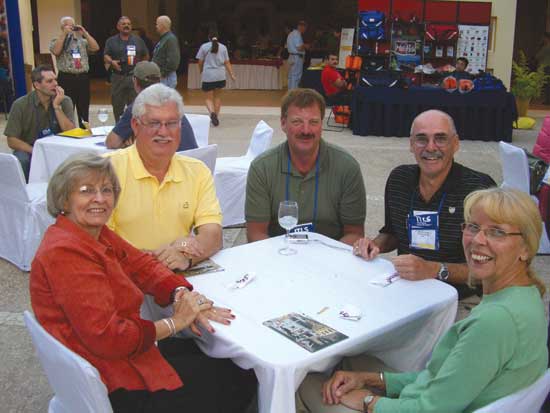 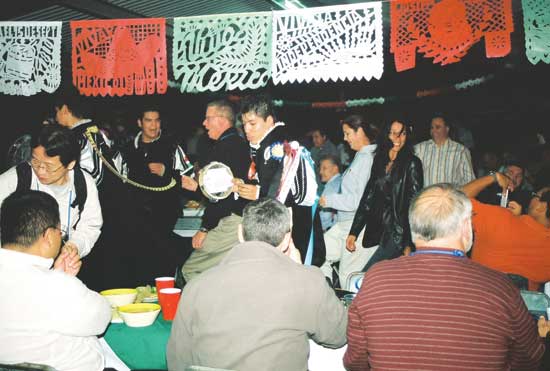 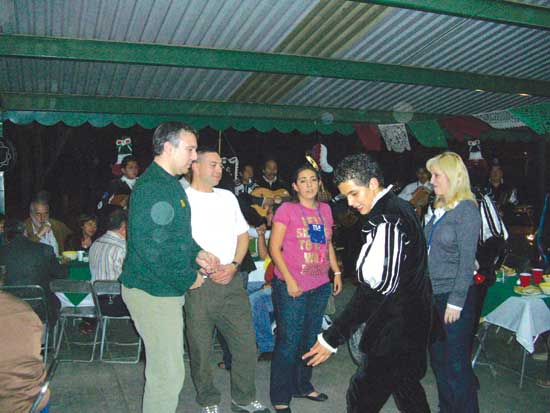 A mariachi singer teaches conference participants some dance steps during the social event. The performers had the crowd singing, clapping, and dancing along to the traditional Mexican folk songs they performed as part of the “Noche Mexicana” experience.